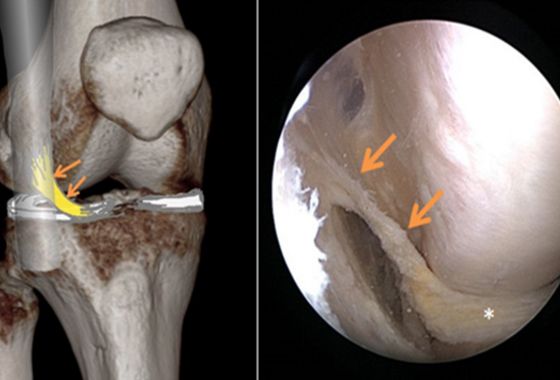 Researchers at Balgrist University Hospital in Zurich have discovered a new ligament in the knee joint: the ‘accessory iliotibial band-meniscal ligament (AIML)’.

The knee joint is often being evaluated with MRI scans and also regularly checked for abnormalities during surgery. It was previously thought that we knew all anatomical details of this joint. However, the AIML – a narrow fibrous connection between the iliotibial band (running along the outside of the knee) and the lateral meniscus – has not previously been described.

According to the study that has just been published, the AIML is an anatomical variant in the fixation of the lateral meniscus. In an analysis of MRI scans performed on more than 1000 people, the AIML was found to be present in 13% of cases. This study was carried out by researchers in the departments of Orthopaedics and Radiology at Balgrist University Hospital.

Although it is an anatomical variant, the presence of an AIML in the knee joint is clinically relevant. People with an AIML have a much higher risk of lateral meniscal tears than the rest of the population.