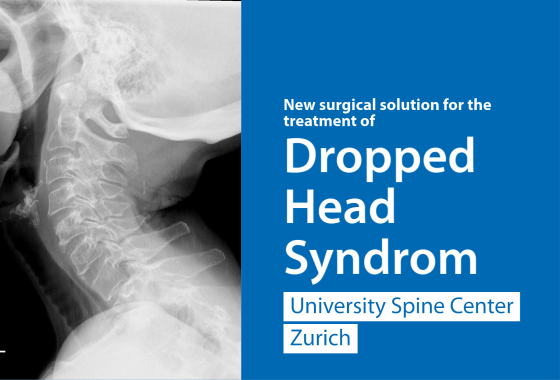 Thanks to a cutting-edge new surgical technique, a patient with Dropped head syndrome was successfully treated without the necessity of me-tallic implants and fusion. The surgical technique was developed at the University Spine Center Zurich.

Dropped head syndrome (DHS), also known as floppy head syndrome, is a rare condition with a broad differential diagnosis. DHS has a considerable impact on the health and qual-ity of life of affected individuals. The neck extensors are weakened to such an extent that patients are unable to hold the head erect. Until now, extensive fixation and fusion of the cervical and thoracic spine has been the only possible treatment for DHS.

Prof. Mazda Farshad, Surgeon in Chief and Director of the University Spine Center Zurich at Balgrist University Hospital, and his team have now developed a new surgical technique making it possible to treat DHS for the first time successfully without fusion. This tech-nique, known as «occipitopexy», supports the head by using ligaments attached to the spine. Today, eighteen months after surgery, the patient, a 68-year-old female, is not only still able to support and maintain a normal head position, but also perform head movement functionality. This represents a less radical and very promising treatment to relieve the pa-tients’ suffering without restricting their quality of life by spinal fusion.