State of the art medicine near you

Access to specialized orthopedicsclose to home: Discover theBalgrist offering in your region. 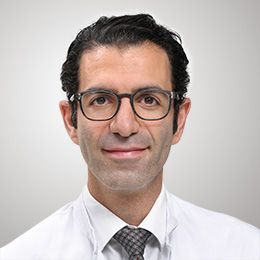 Member of the Board

Disclosure of outside professional activities and interests (Link UZH)

Subsequent to a broad education in orthopedic surgery (FMH board certification 2012) and epidemiology (MPH 2011) and specializing on most complex spinal surgical procedures at the university hospital setting, Prof. Farshad followed the track of a physician scientist. His scientific records document that the focus of his academic activities has been and continues to be improvement of the quality surgical treatment of orthopedic and spine patients. Initial research activities included SNF-supported experimental work in a large animal model focusing on an unsolved clinical problem, namely the retraction of the musculotendinous unit after tear of the tendon. The success of these experimental research was contributions to the understanding of the hitherto not understood patho-mechanisms of degenerative retraction of musculotendinous units and documented by a serial of publications at the renowned AJSM, JBJS and JSES.  Based on these findings novel pharmaceutical and surgical interventions are now being tested to overcome the problem of chronic retraction of the musculotendinous units.

During the last 10 years, Prof. Farshad has identified administrative and methodological challenges in performing complex clinical studies as an important barrier for research activities. Therefore, he has created the unit for clinical and applied research in 2014 (UCAR), which has now developed to a clinical trial center at the Balgrist University hospital under his leadership. This infrastructure is open now to academic orthopedic researchers and has allowed him personally to perform several clinical randomized controlled trials, which have changed worldwide “established” believes. One of the prominent examples was a randomized clinical trial showing that prolonged bedrest, that has been standard of care for decades, is not necessary but rather harmful after repair incidental durotomies during spine surgery.

The current focus of the research and his main academic activity is on improvement of surgery inspired by disruptive technologies. During the last four years, Prof. Farshad has co-founded University startups introducing paradigmatic shifts in surgical planning and execution: Hitherto, orthopedic and spine surgery planning was based on anatomical landmarks. Prof. Farshad has established a paradigm-changing new approach, namely patient’s specific biomechanical simulations for planning of spinal fusion surgeries. Further, execution of the planning so far relied on surgeon’s experience. Prof. Farshad has gathered together a consortium of eight research groups from the University of Zürich, ETH, Balgrist University Hospital and University Hospital Zürich towards introduction of disruptive technologies for automatized functional surgical planning and holographic surgical navigation into clinical care. This initiative has won the HMZ (Hochschulmedizin Zürich) Flagship competition recently.https://www.hochschulmedizin.uzh.ch/de/projekte/surgent.html

Within the shortest of times, he and his research teams have not only built a disruptive holographic navigation method for spine surgery but also set up a randomized clinical study on patients. This clinical study has been recently approved by the recently and is considered first-in-man worldwide. This attracted the attention and created the request of collaboration by the most renowned actors in this field, namely Microsoft and Prof. Navab’s group (chair of augmented reality at TUM (Technische Universität München)).

Reviewer and editorial board activities

The go-to place for back problems

The spine is a key component of the human body and spine surgery is correspondingly important at Balgrist University Hospital. The experienced surgical team led by Prof. Mazda Farshad specialise in the entire spectrum of treatment for diseases and injuries of the spinal column, providing patients with optimal support.